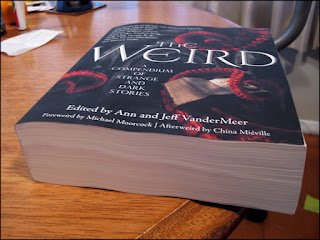 So, instead of a traditional review, I'm going to do something different with Jeff and Ann Vandermeer's fantastically ginormous collection of Weird stories.

I will endeavor to read a story a day from the anthology, and then do a small, quick entry about each story. Not surprisingly, taking into account all the other things that take up what I refer to as 'my life', some days might not yield a review; regardless, I will try to keep up.

The collection is wide-ranging, featuring the likes of Kafka, Borges, Dunsany and Lovecraft, plus a host of others who deserve to be highlighted as contributors to the a genre that remains difficult to pin down. 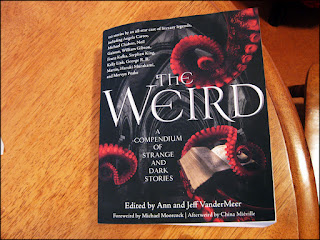 And so it should rightly remain.

Lord Dunsany, “How Nuth Would Have Practiced his Art,” 1912

Gustav Meyrink, “The Man in the Bottle,” 1912 (translation, Austria)

Bruno Schulz, “Sanatorium at the Sign of the Hourglass,” 1937 (translation, Poland)

Michel Bernanos, “The Other Side of the Mountain,” 1967 (new translation by Gio Clairval, France)

William Browning Spenser, “The Ocean and All Its Devices,” 1994

Brian Evenson, “The Brotherhood of Mutilation,” 2003

Wow! Looking forward to your reviews of these. And now I must find a copy of this collection and read along at home...

It's a fantastic collection. Your bookshelf will love it.