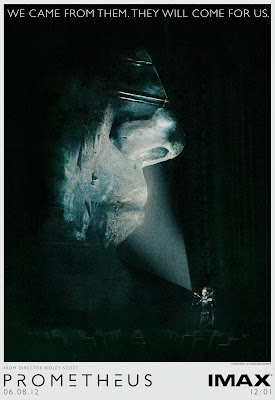 I finally saw Prometheus last night. Jen and I did 2D because neither of us are 3D fans. For me, it detracts from the particular dimensionality of the medium. I like to have a sense of distance when I am watching something on screen. 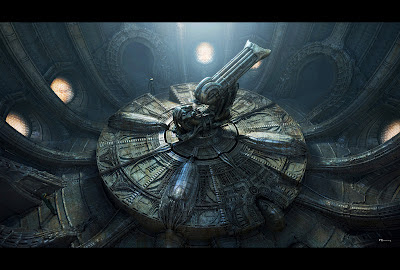 Ok. So, what are my initial thoughts about the film. And I mean initial,because things are likely to be added and revised or built upon after consecutive viewings.

I really, really liked it, and get the feeling that, with repeat viewings, it's a film I will end up loving. Remembering that Prometheus is for all intent and purpose filmed as a summer blockbuster, I think that Scott did an admirable job in balancing what a
blockbuster audience wants from an action movie with the more probing, philosophical and spiritual questions raised by the film.

In many ways, I understand why some have a problem labelling Prometheus an sf film. I'm not entirely convinced that it is sf, per se; not if you're conception of sf is that it provides working, logical answers. I'm thrilled and surprised that Scott has managed to bring a film like this to the big screen, considering the current state of religion and what's morally acceptable in America. Considering all the other drek that gets released by Hollywood studious, I'd take unanswered questions over a grown man's crude and extremely inappropriate teddy bear every time.

Is the planet at the beginning of Prometheus Earth? Who knows. Does it matter? Maybe not. Maybe. If it's not Earth, and somehow the Engineer's DNA made it to our planet (asteroid?), then there is still a very strong evolutionary motif present in Prometheus. I don't understand arguments classifying the film as being particularly creationist at all, as much as I don't agree with it as Christian myth revised. Me, a lapsed Protestant, who holds at least a BA in Religious Studies, which deals to a large degree with symbolism. Symbolism is fine, but we need to take into account that symbols are often simply symbolic of something else. Some symbols have been so didacticised that they have lost their original meaning. As for the angry mobs who label Prometheus a film version of Erich Von Daniken's Chariots of the Gods, this is not entirely true. The Engineer's may be "aliens" who made us, but like Shaw asks, "Who made [the Engineers]?" I think the word "alien" has come to mean certain things that have alienated (wha-whaa) it from its very basic meaning: "to be otherwise", "different", "foreign". And no matter how you feel about Von Daniken, he represents the questioning instinct that is so sorely lacking in contemporary science and spirituality. 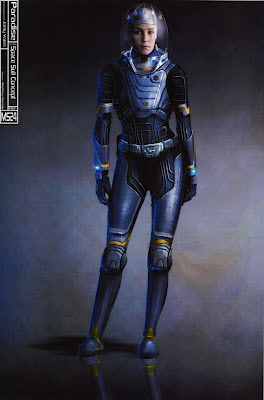 If you can unequivocally answer the question "Where did human life originate?" then you deserve all the answers you demand from Prometheus. Whether you consider yourself an agnostic or religiously inclined person, Prometheus is going to step on your toes. Have you seen the detailed breakdown of the film as Christian allegory? It's a bit puerile, and reads like someone who has taken Symbology 101 and then decided to apply as much mythic countenance to what is, in essence, the universal creation myth. The problem is that this particular narrative cycle re-occurs throughout a number of cultural myths. It is not definitively Christian. Again, symbols are not static. Go read some Geertz.

Even if we momentarily consider a Christian interpretation of the film, it is most certainly a subverted one. If Elizabeth Shaw is supposed to be the Virgin Mary, she does not react the same as her namesake from the Bible. She cuts the alien from her womb and is clear that she wants nothing to do with it. That the alien foetus -- having grown exponentially by the end of the film -- saves her life regardless of Shaw trying to murder it may seem problematic to some, but we have to consider that such a life form may simply not adhere to the same (moral?) survival code as humans. It might simply have saved Shaw because it saw the Engineer as the next evolutionary step up in its development.

One of the underlying narratives of the film I found very interesting was the relationship between parent and child. Most obvious in this context is the triangle between David, Peter Weyland and Meredith Vickers. Meredith clearly hates David, and sees him as direct competition for her father's affections, a man she contradictorily seems to hate, or at the very least, feels little love for. David is an android, and as Peter Weyland himself describes David, "the son I never had."

What makes this triangle even more interesting is the consideration that Meredith might be an android herself. Sure, she and Janek had sex in a bid for Meredith to disprove this, but take into consideration the quip Holloway throws at David earlier when he comments on how "real" David looks: "They sure do make you well these days." How well, exactly? Well enough for Janek to be fooled into thinking he was sleeping with a human? Also, when the crew wakes after being in cryo-sleep for two years, everyone seems disorientated or even sick. Meredith, on the other hand, is on the floor doing push-ups like she's just graduated from Navy Seal camp. Hmmm.

If, on the other hand, Vickers is human, her actions and ultimately, her death, is a direct result of her contradictory feelings for her father. She could have said that her reasons for being on the ship was because she didn't want to be stuck in bureaucratic Weyland-hell, when the truth was that she wanted to be close to her father, to try and protect him, despite the fact that Weyland clearly did not care about whether she was there or not. She might have even wanted to protect him from David, who, while seemingly following Weyland's orders, still appeared to have motives of his own. (He may still have them, and we might have to wait for more movies to find out what exactly they are.) Unable to free herself from the desperate, unattainable approval she seeks from her father, Meredith is crushed by the Derelict/Juggernaut - the very thing that Peter Weyland came to find his answers from. 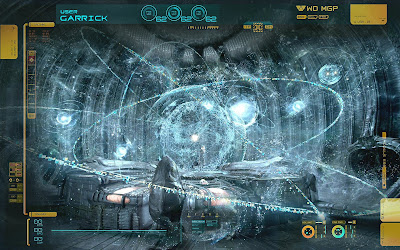 The parent/child relationship also affects Elizabeth Shaw and her father, a scientist (an anthropologist like Elizabeth?) who died after being infected with the Ebola virus. Questions arise about the bond between child and parent, as do issues of moral and ethical responsibility concerning blood relation. Is it a good thing to emulate the values of our parents? How much of who/what we become is genetic, and how much is a matter of parental direction/influence? Even in the face of knowing that our parents may have been wrong, why do we still cling to what they have taught us? Consider Elizabeth and the cross (her father's) that she wears around her neck. By the end of the film, her faith and scientific foundations have been visibly shaken, yet she demands that David give the cross back to her and once more puts it around her neck, effectively keeping herself tied to her father and his ideals/expectations/beliefs. I'm hoping that Shaw's motivations and inner struggles related to her faith will be explored in more depth in future installments. The parent/child issue is fundamentally the heart of Prometheus when we consider our relationship to the Engineers, as well as their own point of origin.

There are some  poignant philosophical/spiritual moments in Prometheus. One of the highlights in this respect comes when David and a drunk Holloway have a discussion in which David asks the scientist why humans created robots. Holloway responds by saying, somewhat derogatorily, "Because we can." David then asks him how disappointed he would be if he ever met his maker and, asking the same question, gets the same answer. 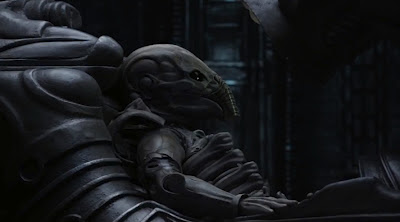 There is a very definitive streak of existentialism running throughout the film. It's very Lovecraftian, highlighting the inconsequential nature of mankind against the vast cosmicism of the unknown. Yes, we think we are unique, and that we have purpose, but do we? If we were created by chance as a result of some cosmic bang, [E]ngineered or not, does that in any way dilute our sense of purpose and/or meaning? These are the questions that underlie much of the conflict that has plagued humanity in the past, continues to do so today, and will no doubt be with us for a long time to come. For that alone, Prometheus is an important film.

The end of the film has clearly been left wide open for a sequel and the opportunity to reboot the entire Alien franchise anew. From a writer's point of view, the Alien universe is an extremely complex one. We as viewers have access to this universe only via what we are shown. I am always weary of questioning an author/creator's vision. As viewer (or reader), I simply do not have enough to go on that allows me to pass judgement on whether a film (or book) has failed. It is an organic process, and the outcome of creative vision can sometimes be strangely out of the control of even its creator. All I can comment on is what the final execution of this vision has meant to me. I can't wait to see where the next instalment (supposedly titled "Paradise", the original title of Prometheus) leads. In the meantime, I'll try and wait patiently for a Director's Cut of Prometheus and several repeat viewings of a film I hope many, many people go to see.

Posted by Lynne Jamneck at 1:25 PM

Interesting - I think this may be, if not the first, then certainly the most thoughtful, positive response from someone I know.

My response was pretty much the opposite of yours in most ways. Oh well.

So far my favourite review is this one:
http://morgue.isprettyawesome.com/?p=3008

Like a friend of mine said, Scott made a polarising film, and that's not a bad thing. I agree.